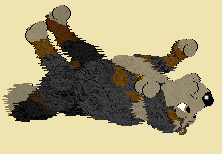 Alfred ♂
Dalmation (Bernese Mountain Dog OW)
Bred by Andi@Cirrutopia
When I reinstalled my game, I went looking for downloadable adoptions, and picked out this one.  Not only is he the first dog I got in this game, but he's one of my favorites!  He's a playful darling, and tends to break up fights.  I think of him as the pack leader if there is such a thing in Petz.  He and Lily are mates. 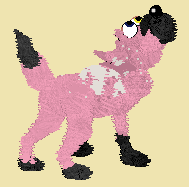 Chester ♂
Great Dane
Hexed by me
Chester is the first pet I hexed when I got back into Petz this year. Not only is he adorable (with odd eyes!) but he's a total sweetheart. 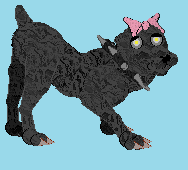 Deathy ♀
Labrador/Death Hound
Hexed by me
My gf wanted me to hex her a Death Hound from Skyrim, and playing with hers made me decide to keep  one of my own.  She's kinda creepy looking and a total dorkface sweetheart.  (The dog, not my girlfriend.)  She likes to wear pretty clothes, take naps, and get treats.  A lot. 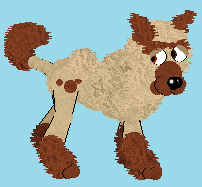 Felicity ♀
Great Dane
Hexed by LadyWeeny
LadyWeeny offered dane hexies to the first three who posted their email, and I couldn't resist.  And look at her!  The cute poodly cut, the spots on the butt, and something I always love, MISMATCHED EYES.  Personality-wise, she seems to really like playing with cats and licking the curser hand.  :D

Jade ♀
mixed breed
Bred by OverIt
Jade is the only pet I saved from a massive computer crash, which is nice as she was my favorite in my old game.  She's a Mama's girl--not huge on other petz, but follows the cursor around like it knows the secret of life.  She's also a fabulous fetch-player and a quick learner for tricks. 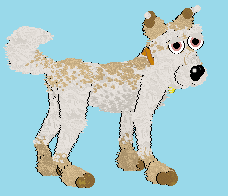 Lawrence ♂
Great Dane
Hexed by Foxb0ro@Misfit
He was my gift from the 2014 summer swap.  I'd just watched Lawrence of Arabia and his sandy color and cheerful boldness made me think of T. E. Lawrence as played by Peter O'Toole.  Unlike TEL, he's not an arrogant jerk, though he does quite love picking fights with everyone else, especially Titus. 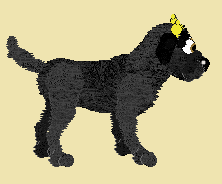 Lily ♀
Labrador
Adoption Center dog
I think she came out of the AC by accident early in my game, and I didn't have the heart to put her back.  She's a lot of fun, awesome at playing fetch, and loves chasing cats.  Her mate is Alfred. 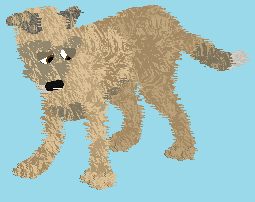 Oberon ♂
Irish Wolfhound
Hexed by jax
I'm a sucker for Irish Wolfhounds anyway, plus I'm a huge fan of Kevin Hearne's Iron Druid series, in which the hero's best friend is his wolfhound, Oberon.  So when Jax put these guys up for raffle, I had to try, and I was so excited when I got him!  He's also a big clumsy sweetheart, as all Dane-based dogz seem to be, and gets sad if he's all by himself.

Ophelia ♀ (MG's Doubt Truth to be a Liar)
Hundr-Dane
Hexed by me
I was admiring someone's black and white dog with heterochromia and decided to just make my own; this led to my entire Hundr overwrite breed!  She likes to play with toys and she LOVES posing, but so far she doesn't seem to get along with other petz much.  We'll see how that goes. 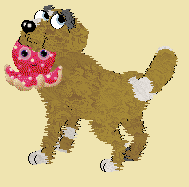 Saul ♂ (Sheba's/MG's Invitation to Endless Wonder)
mixed breed
Bred by shebaatje
I believe he was up for adoption on RKC with a whole bunch of other petz.  I couldn't resist those big bushy eyebrows; I named him after my favorite actor Saul Rubinek, who is also in possession of bushy brows.  He's got adorable white patches and a gray foot as well as The Brows (my Saul, not the actor) and just wants to play all day forever and ever.  I don't think he's ever gotten into a fight with anyone.  He's also my best poser.
Show points:  2 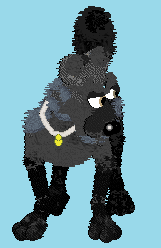 Titus ♂
Great Dane
Hexed by Foxb0ro@Misfit
He was my other gift from the 2014 summer swap.  Since he's so similar, it seemed only natural to name him after another favorite English explorer, Lawrence "Titus" Oates, who perished on the Scott expedition to the Antarctic.  Not unlike the real Titus Oates, he's a bit of a grump, but ultimately a good fella. 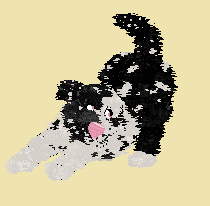 Zanni ♂
Sheepdog
Hexed by Susan@THK
Zanni kept showing up when I was idly browsing PUGS, and looking too adorable with his clowny face.  I like sheepdogs a lot and never got around to adopting one this game, so I figured that was my sign.  Plus, Susan is one of my favorite people in the PC so it's always nice to support her.  His name comes from a variety of harlequin, due to his patterning, nose, and clumsy personality.

Bran ♂
Mixed breed
Bred by Rivendell
He was a PUGS find.  I loved his pink eyes, and he's rather petite.  I named him after a hero of Irish mythology, whose name apparently means raven; I thought it worked for his dark patterning.  He likes to fight and play, in that order. 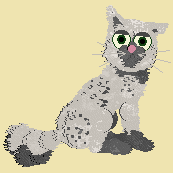 Deanna ♀
Maine Coon
Hexed by Susan@THK
Susan put up her Crook Cats for custom on PUGS and I couldn't resist.  My only request was some sort of grayscale, and apparently she had a ton of others request the same thing; she still managed to make them all unique!  Deanna is super fun, loves to dance around and play, and would happily play dress up forever.  She's probably my favorite cat.  She's another natural poser.  She and Dionysus are a couple. 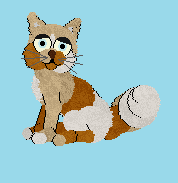 Dionysus ♂
mixed breed
Bred by Kristina
Kristina put up a litter of KittyCatz OW mixes for Christmas.  I was a smidge late, but she let me have him anyway.  He's the cutest thing ever, sweet and playful, loves to bounce around like a big dork.  And it's hard to resist the little smile the breedfile has!  A few minutes after bringing him in the game, he and Deanna hit it off, but he also gets along with all my other petz so far.

Freyja ♀
Mixed breed
Bred by Andi@Cirrutopia
When I reinstalled Petz, I decided to find some clickable adoptions to start out my game, and she was the one I picked.  I love her big floofy tail and Maine Coon markings.  She loves hunting and she's a massive grumpasaurus.  I named her after the Norse goddess, whose chariot was pulled by cats. 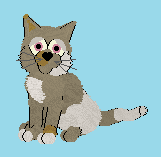 Kebab ♂
mixed breed
Bred by Bohème
I bought this cutie from PUGS.  I'm a sucker for pink eyes, and he was so cute.  When I got him, I discovered that he has the oshie tremble but otherwise a perfect calico personality.  My gf and I decided it was a neurological condition; I think I diagnosed it as cerebellar hypoplasia but don't quote me on that.  Otherwise he's a cheerful, fearless, playful little guy who wants all the love. 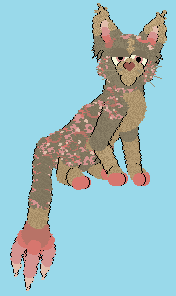 Lailah ♀
Calico
Hexed by midnightwolf
Midnightwolf posted a few beautiful cats for raffle on RKC in honor of his deceased cat, Angel.  I fell in love with Lailah; aside from those EAR TUFTS, she's my favorite color, and her name's reminiscent of "Layla" by Eric Clapton.  I was SO glad to win her, and even more when I got her--she's a sassy little lady, loves being the boss, and also thinks she needs to stalk all of her food before eating it, which is hilarious.  She's also the pet that made me decide to start hexing again, so feel free to blame midnightwolf for all the weird crap I make. 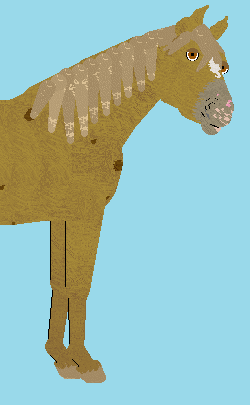 Lady ♀ (MG's Fight Like a Girl)
Manda V1
Hexed by me
So far my only SeeingStars-style horse.  She's a gold champagne palomino with Ben d'Or spots and amber eyes.  She loves eating and playing with other petz.  I haven't done much with her yet, but I like how she turned out, and plan to enter her into endurance. 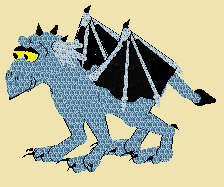 Gus ♂
(Augustus)
Derp Dragon (based on Lab)
Hexed by me
My gf suggested I hex a dragon, and this silly dork came out.  He's not fierce, nor is he particularly elegant or graceful.  He loves playing with plushies and flying disks, and LOVES dressing up.